America Is the Greatest Country in the World! Happy Birthday U.S.A.!

That’s why they hate the United States of America… it’s prosperity, it’s language, it’s history, it’s Constitution and Bill of Rights… it’s President, it’s Stars & Stripes, it’s people, it’s military, it’s institutions, it’s freedoms, it’s rule of law. They hate everything American. Except for the U.S. dollar (well, they hate the U.S. dollar too, unless it’s in their pocket).  They blindly deny that America is the greatest country in the world. I still say, Happy Birthday USA!

Upon what is the hatred and criticism predicated?

“…the blind love and allegiance to America scares me…the U.S. is still undergoing an identity crisis (they’ve still hardly settled on one language…)” is what the Opinion writer said. (Source: https://bit.ly/2VJetm3)

Hmm, interesting… my ride on the train the other day was surreal… I almost felt like I was in a foreign country…

There was a woman with two small children…

She also had a baby that appeared to be not more than just a month or two… she laid the baby on top of a blanket in the seat next to her as she endlessly yakked on her phone!

What if the baby had fallen to the floor? Can you see the lawsuit? $$$$? She couldn’t foresee that or did she?

In fact, one of the kids did fall on the floor and started crying. She finally said something to them, though not in English and they came running back to her.

The man and a group of teenagers…

A man sat by himself, he was on the phone speaking loudly, waiving his arms in the air and holding his phone with the other… embroiled in the longest call I had ever witnessed.

Through it all he spoke in something other than English.

And then a group of teenagers… dressed in the latest fads, carrying on and all, did not utter a single word of English.

Overhead on the train near the entrance a small notice read: please be considerate of other passengers when talking or on your phone, so as not to disturb other passengers … something to that effect.

No one was the least bit concerned. I doubt if they even noticed, neither did they understand, nor care enough to read the notice…

She too was on her phone the whole time…I can’t tell you whether she was speaking in English or not, I couldn’t hear her from where I was on the train.

Imagine if, instead of Che Guevara’s image on her t-shirt, it had been President Trump’s image with his signature slogan, “Make America Great Again.”

The former yeah…the latter, nope, you can’t have that because as the Opinion writer said, “…there is something very creepy about the Americans who so diligently love their country.” (Source: The Guardian)

Did you get this? That’s right… according to the Opinion it’s Americans who love our country that are “creepy.”

Funny, the last time I heard the word “creepy,” I heard it from a teenager saying, “dude that’s creepy.” 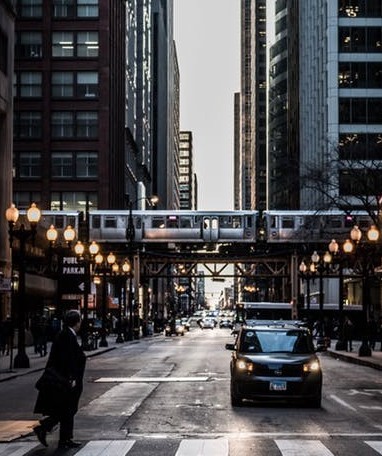 At this point, I had to check to see what country I was in …

Oh ok, I was still in the USA.

Therefore, that driver could not possibly have offended any Americans with his flag.

And who cares if Americans were offended?

As such there can be no “creepiness,” no “identity crisis” – impossible!

he was carrying what appeared to be a pouch or bag …and he went from passenger to passenger begging for spare change.

There was a sign that read “soliciting is prohibited,” but who cares? The “rule of law”? Most of these people either didn’t understand written English or didn’t care.

And by the way, I didn’t see any of the ‘privileged ones’ on the train. You know, some politicians, Hollywood actors, nope… and no social justice warriors either to protect you or to help the guy begging for your spare change.

Silly me. I shouldn’t expect the entitled ones to rely upon such public modes of transportation as the rest of us common folk.

But, wait! I heard on the news that another Hollywood actor was threatening to leave… moving his family to another country to protest President Trump! They’ve been saying that since before President Trump was elected President and they’re still here, they haven’t left…

I digress… remember the guy on the train begging for spare change? He was the only one that I heard speaking English.

Oh, and I almost forgot … a woman hopped on the train right behind him… chewing and popping her gum at about 50 mph in a 10 mph zone, she was wearing a t-shirt that read: “I’m a Dreamer, come and get me!”

Just then the train came to another stop… it was my stop!!

Thirty (30) states in the U.S.A. have indeed granted official status to the English language…

Meaning that there are still some twenty (20) states that have yet to do so.

Throughout the years, various attempts have been made to enact English as our official language…initially, as an Amendment to the Constitution in 1981. Since then, bills have been introduced, but inevitably they simply fall by the wayside.  Opponents of English language bills, cite a myriad of reasons; empty rhetoric that such measures are unconstitutional, unnecessary, merely discriminatory and racist. (Source: https://bit.ly/2AEATfk).

Supporters of English language bills advance numerous grounds for the urgent need to enact English as the official language in the U.S.. However, with the explosive numbers of non-English speaking immigrants that have poured across our borders consistently for years, the language barriers that divide the country into separate groups and/or enclaves has become pronounced.

Sometimes, it appears that there is no more room for Americans in the USA.

If the United States of America is to remain viable, English language legislation is imperative and necessary for a workable solution towards reducing and eradicating racial and ethnic problems. Id.

A nation of never ending immigrants?

The politicians in the U.S. who oppose the idea of a national language that would unify the country call the U.S. a country of immigrants; and label Americans, un-American, “deplorables,” and the like.

In fact, some politicians in the U.S., simply identify themselves as immigrants. Really an attempt to cozy up to and garner the immigrant vote.

A spirit of anti-American patriotism seems to be pervading our country – condemning Americans for allegiance to our homeland.

And there are those that are forever stuck and congealed in the 1700’s, intentionally overlooking the progress that has been made through history, through generations and centuries.

To belittle and shame Americans for identifying as Americans, in a patronizing sort of way… a speaker for his own self-serving purposes will resort to the “this is a country of immigrants” excuse.

So that you as an American, can never have a reason to be patriotic.

The narrative that the U.S. is a country of immigrants is an attempt to make Americans feel anything, but American, regardless of your skin color and/or ethnic background.

This 4th of July, be proud to be American… fly the Stars and Stripes and stand for our National Anthem 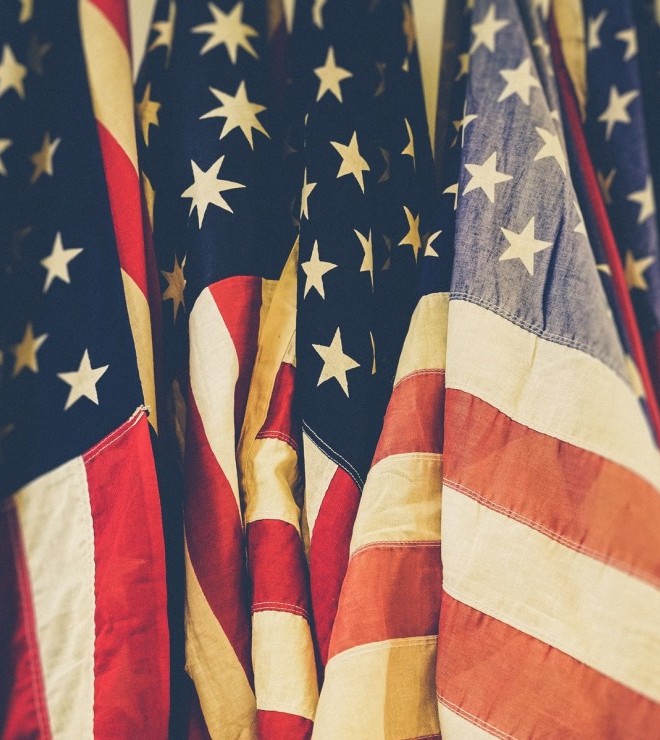 Patriotic Americans have been the backbone of this country setting the standard for bravery, honor and duty to country… responding with enormous hearts to the call of the country, great patriots in the history of our country:

And we should not forget;

Abraham Lincoln, the first Republican President. It was he who said, “My dream is of a place and a time where America will once again be seen as the last best hope of earth.” (Source: https://bit.ly/2FhpB4N).

The great abolitionist Harriet Tubman, brave and strong, yet had a spirit of humility and tremendous faith, “It wasn’t me, it was the Lord! I always told Him, ‘I trust to you. I don’t know where to go or what to do, but I expect You to lead me,’ and He always did.” (Source: https://bit.ly/2Fmdbrr).

Each of them a part of history that cannot be denied or erased.

who with conviction and integrity in their hearts have responded to the call of duty not only for our country, but to save and protect and stand shoulder to shoulder with our friends in Europe, Africa, the Middle East :

Millions of Americans have bravely fought and sacrificed to preserve our Constitution, our liberties, our American way of life and respect for the rule of law.

When troubles befall other nations, the USA is always the first to respond, to help and support. Often at great risk to our very own.

The greatest American patriots: our military, our veterans, our active duty men and women...

They are the heart of America, they embody true patriotism and heroism, to them we are indebted…

We are challenged and reminded that we have some big shoes to fill… the number of Americans that have served in comparison to everyone that has lived here in our country throughout its 242nd year history is less than ½ of 1%. Even today less than 1% of the population is in uniform on active duty.

Thomas Edison, an American inventor, he was home-schooled. Yet, to him we owe the invention of the telegraph, the phonograph, incandescent electric light bulbs, batteries and motion picture cameras, to benefit our country and indeed the human race with whom we share this earth. (Source: https://bit.ly/2SM4pXC)

Amelia Earhart, an American aviator. She was the first female to fly across the Atlantic ocean. She defied all cultural expectations for women of that time, and I venture to say even so today. (Source: https://bit.ly/2qZXxYF)

Rev. Martin Luther King, an American Baptist minister. A powerhouse of leadership in the civil rights movement, he rejected violence and violent protests. He received the Nobel Peace Prize, he was not for segregation, but was instead the central figure in ending legal segregation. (Source: https://bit.ly/2r907vw)

Perhaps a most powerful challenge, in his historical inaugural address on January 1961, President Kennedy posited:

And where are we now?

Under the leadership of President Trump, with his policies of corporate tax cuts, clampdown on bureaucracy, rebuilding of our infrastructure, etc., we are beginning to see much improvement, e.g., low unemployment, economy is doing well, the stock market has been an unbelievable success.

This is perhaps in large part due to the President’s background as an experienced and knowledgeable businessman, he understands how the economy works, after all, he is a self-made millionaire. We have a leader and a warrior that is genuinely concerned for the American people and not his own pocket. In fact, the President freely donated his first year salary in office to charity.

No president has done so much good for the country and its people in such a short time, truly history in the making! The American people can take heart from the fact that we have a President that is making America great again.

I saw a bumper sticker, it said: “The American Flag, it offends until it defends!”

So, to the Opinion writer, I hope this article has helped to allay your misconceptions.  Patriotic Americans are not suffering from an “identity crisis,” but perhaps some of the politicians and certain contingents may be….

2 thoughts on “America Is the Greatest Country in the World! Happy Birthday U.S.A.!”